The Boeing F-15 needs no introduction. And though some might argue, for the last 40-some years (before the introduction of the F-22) the superiority of the mighty Eagle had no equal. Despite that, the F-15 is not my favorite AC to build. It’s a great and graceful plane, though no doubt just by looking her lines. But if I had to chose between building an F-15 or an F-4, I would choose the latter.

A new box doesn’t mean a new kit, so I have learned. I took this down off my shelf twith the simple reason that I want to clear out my stash from 1:72 modern aircraft kits. I have a couple of them including this one.

Like many other 1/72 scale offering from Academy, the F-15C MSIP II “California ANG 144th FW” (kit no. 12531) is a re-boxing with some nice goodies. The oldest release that can be traced back as the kit’s ancestor is Academy F-15C Eagle No.2108 issued in 1991.  The plastic hasn’t change much. However, Academy added a superb new decal sheet from Cartograf and new molded sprues with detailed AIM-9s, AIM-120s, launch rails, wing pylons, and blade antennas. (www.scalemates.com).

The re-boxing just means that you will find the same POS in the new box – which made this kit notoriously unfriendly to build – except for some surprising new goodies. I guess Academy don’t want to stay dormant and watch other competitors take over the modeling world.

The new seats, antennas, weapons, pylons, and drop tanks are molded into the old sprue set, guessing that Academy had probably retooled its molding blocks. So here is a list of new items that made this kit differ than the last: 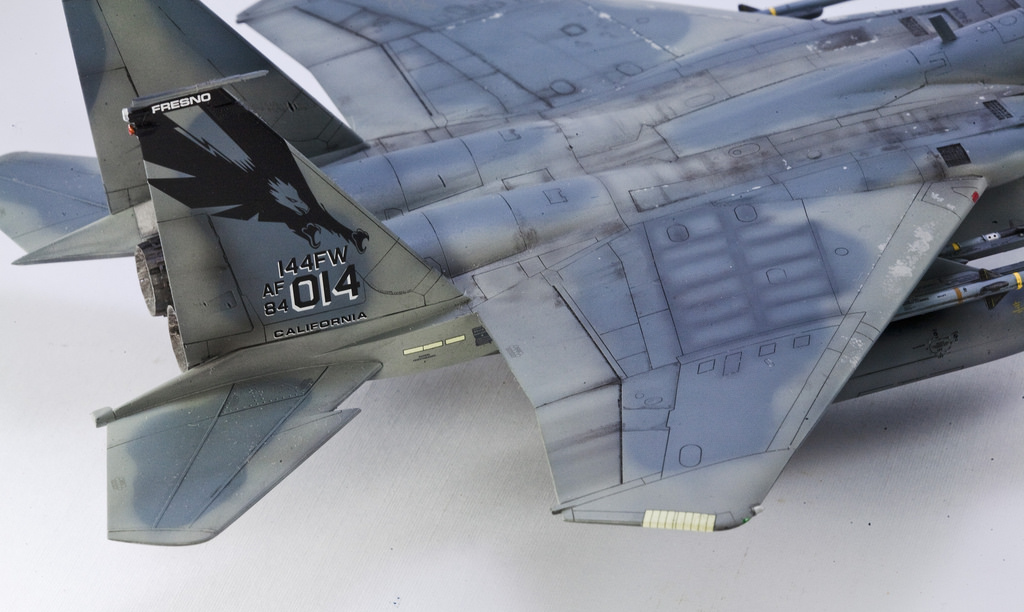 As expected, the decals were just a pleasure work with. I chose aircraft BuNo 84-014, 144th Fighter Wing, 194th FS, California Air National Guard. The set went down very nice over a glossy surface, and with the help of Mr. Mark Softer and Setter. The sheet includes a complete set of stencils for the missiles and drop tanks. I gave the model another layer of gloss coat before continue to wash the panel lines using Tamiya Panel Line Accent.

This is not my first Academy F-15 so I had a bit more experience dealing with the kit’s antiques. I can say that the biggest challenge lies with assembling the intakes, and adding them to the center and front fuselage section together. By design, these three-different parts don’t fit very well. And to make it worse, if you follow the instruction, you would end up using a lot of putty and considerable sanding work.

At any rate, I recommend that when you come to the stage where you have to glue the front fuselage together, you may want to follow the sequece below. Patience is key. And of course a slow-curing cement like Tamiya extra thin.

The F-15’s rear end is covered in metallic heat resistance surface.  I undercoated the model using Mr. Surfacer Black 1500, I installed the canopies which were masked using Tamiya’s curved and regular tape. The rear part of the fuselage was sprayed Alclad 101 straight from the bottle.  I tinted the nozzle shroud fairing with diluted X-32 Titanium Silver. The nozzle and actuators were MM Burnt Iron. Before I took off the masking tape, I added different metallic shades onto selected panels.

To replicate the two-tone greys, I used Mr. Color 308 (FS36375) for the lighter grey, while for the darker grey, I mixed Mr. Color 308 and Mr. Color 317 (FS36231) in a 3:7 ratio. The soft-edge pattern was achieved by using Blu-tack to help mask the boundaries. Further tonal variation was achieved by spraying a lighter shades of grey, such as XF-80 Royal Light Grey and XF-83 Medium Sea Grey.

I found images on the Interwebs of the F-15 in various stage of wear and tear: chipped paints, soot, new paint over spray, replacement parts. It was these kind of references that would inspire me to make my models look more interesting.

My model shows a culmination of weathering effects from different aircraft. I went about in using all sorts of techniques to imitate them. There is no set of rules, as long as they help you closely replicated the effect that I want to achieve.

I recreate the paint chipping by dabbing XF-19 Sky Grey, and flat black using a sponge, fine brush, and pointed cocktails stick; the re-painted areas on the wing was masked and sprayed a darker shade of grey Mr. Color 305; and the exhaust cones were dry-brushed with A.MIG.3009 Gun Metal.

The sooty and dirty panel lines – notably on the aircraft’s belly – were achieved by masking and airbrushing diluted X-19 Smoke and flat black, combined with Tamiya weathering Master set and A.MIG.3001 Black applied with a small brush and cotton swipes.

The very last set of thing to do was giving the model a flat coat using my favorite Mr. Color 182 Flat Clear. Then followed by attaching the missiles and drop tanks; painting the navigation lights A.MIG.093 Crystal Red and A.MIG.099 Crystal Blue; and peeling off the masking and installing the clear plastic canopy with Tamiya Extra Thin.